King’s staff and pupils joined cyclists of all ages and abilities, including young people from Courtfields School, Wellington School, families with young children in cargo bikes, and veteran cyclists from the Wellington Wheelers and Taunton Area Cycling Campaign, who helped organise the protest. The organisers of the ‘Great Big Safety Ride’ were drawing attention to the lack of a safe cycle route along the A38 by riding the route in convoy with emergency vehicles protecting them – the only way in which it is safe for most cyclists to use the route currently.

Richard Biggs, Headmaster of King’s College, Taunton, who participated in the ride, said: “What a fabulous and uplifting day! We support this Citizens Somerset campaign because we want our children to feel safe when they cycle, and so that they have to drive less. It’s good for the environment too!” 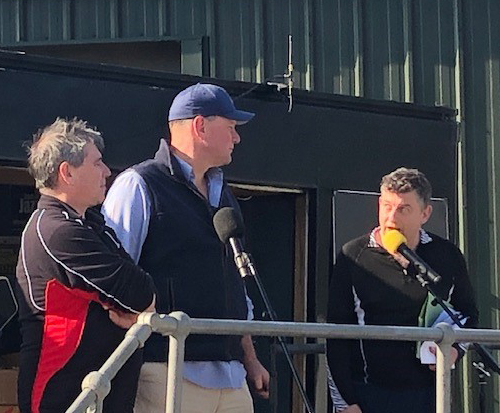 The protest began with a peloton of 120 riders cycling along the A38 from Wellington to Sheppy’s Cider Farm midway between the two towns. Once they had safely arrived, another peloton of 120 riders departed from Taunton and converged on Sheppy’s. The assembled campaigners were welcomed by Dave Sheppy, owner of Sheppy’s Cider Farm, who announced his support for the campaign. They then listened to testimonies from local people who supported the provision of a safe cycle path, including commuters who had been knocked off their bikes on the A38, young people who wanted to be less reliant on cars, and older people in local villages keen to get back on their bikes.

Members of local community organising alliance, Citizens Somerset, celebrated as politicians from all of the major political parties signed up to their ‘Safe Cycling Pledge’ following a cycling protest along the A38 involving over 250 local people. In addition, the local MP, Rebecca Pow and current Somerset County Council Leader, David Fothergill, committed to support a safe cycle route between Wellington and Taunton.

Citizens Somerset are targeting candidates in the upcoming elections for the new Somerset Unitary Authority and asking them to prioritise funding for Safe Cycling Routes across the county, and to bring forward the construction of the Wellington to Taunton Cycle Route to 2025.

Chris Waddilove, a Citizens Somerset leader who helped to organise the protest, said:
“It is great to see the support from all parties for the Wellington to Taunton cycle path.  We organised this protest to show how unsafe the A38 is for cyclists, and to demonstrate the public support for the provision of a cycle path. Today politicians from all parties have responded positively – but now we need to see that warmth turned into a commitment to by the new Somerset Unitary Authority to get construction going by 2025 at the latest.”