On Saturday, King's Fourth Form Pupils enjoyed a thought-provoking lecture, the subject of which is closely aligned to their current studies.

Mrs Yvonne Mbanefo, a King's parent and an educator in Igbo language and culture, gave a talk to our Fourth Form about the context for Purple Hibiscus, the novel by Chimamanda Ngozi Adichie which GCSE classes have been studying. It was remarkable to hear this explained by someone who knows the writer, and who has lived in the locations depicted in the story – Nigeria in the 1990s.

Mrs Mbanefo was able to highlight for us details in the text that illustrated some of the novel's concerns, but also to explore some of the more complex cultural currents running through the characters and the text.

This is a book about the promise of freedom; about the blurred lines between childhood and adulthood; between love and hatred; between the old gods and the new. The pupils were thoroughly engaged, and asked several pertinent questions regarding the subject matter. They were particularly interested in learning more about the author, and Mrs Mbanefo's friendship with her.

Mrs Mbanefo's career sits at the intersection of digital media, cultural heritage and education, deploying technology as an active tool to educate people through storytelling. She has a deep interest in the relationship between everyday life, individual experiences, power structures, and cultural forms in different communities, as well as ways in which to use them to foster cultural intelligence across societies. She has gained a reputation as a cultural consultant in various projects, such as film, radio, theatre productions, book publishing and other heritage-related projects.  She is best known for her work in Igbo Studies and advocacy for African languages. 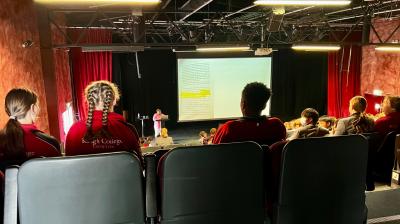 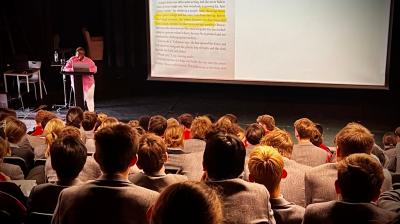